How do you like to spend cold and snowy Saturday afternoons? For us baking is #1, but crafting comes in a  close second, especially when our best friends share in the fun. One of the many things we have in common is our love of great conversations over great coffee. Personalizing coffee mugs seemed a perfect fit for this craft session. Dollar store mugs, Sharpie paint pens, and lots of imagination is all it took to create these one of a kind treasures. Crafts completed. Now on to baking! 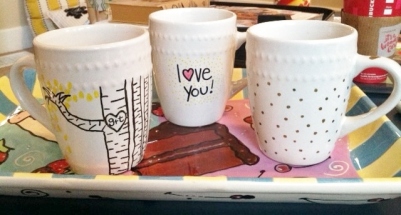 Holy apples! Our fridge looks like Johnny Appleseed came for a visit! We have so many apples from our apple picking trip last weekend that it is necessary we apple treat again. Good thing there are so many yummy apple desserts. Apple crisp is #1 in our opinion. But we discovered a recipe that can top it, Cookie Butter Apple Crisp baked in cute little jars. Individual servings, we’ll take two please!

Ingredients (2 servings)
For the apple filling:
Instructions
Preheat your oven to 375 degrees.
In a small bowl, combine the apples through the nutmeg for the apple filling. Set aside.
In another small bowl, whisk together the flour, oats, cinnamon, and brown sugar for the crisp topping. Cut in the chilled butter until the mixture is crumbly. Now mix in the cookie butter. Set aside.
Spray the insides of two 12 oz glass jars with cooking spray. Evenly distribute the apple filling between the two jars. Now top each jar with the cookie butter crisp dough.
Place both filled jars in a baking pan and fill with about an inch of water.
Bake for 25-30 minutes, until the apples are bubbly and the crisp topping is golden brown.
All to cool to warm before serving.
Top with whipped cream or ice cream, if you wish.
*recipe found on The Frugal Foodie Mama

We’ve been quoted a time or two saying, “Everyone deserves a break from their job”.  Ask the hubs!  We rarely consider Saturday baking  work, but we’re taking a breather anyway and leaving the indulgences up to our mom as we celebrate our niece’s first birthday. Oh there will be sweet treats galore and we will not hesitate to try them all! Enjoy your day and take a hint from us and leave the work for someone else!

P.S. Be sure to check back next week for a delicious recipe for Dark Chocolate Frosted Caramel Toffee Bars.

It’s been gloomy and raining A LOT around here lately. We could spend the time being couch potatoes catching up on on our DVR shows, but no, not us! We’d rather be crafting! What better way to brighten the gray away than by making a colorful tassel garland to hang in a spot that needs a little extra shine. This is really easy and will make any area super spec!

How to Make a Fabric Tassel Garland

You can make the tassels any size you like. We cut our fabric rectangles around 6″X 10″.

Fold your fabric in half so the two shorter sides meet.

Make cuts in your fabric about an inch apart, stopping around 1.5″ before the fold. 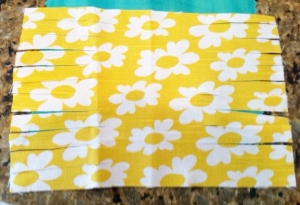 Now unfold your fabric and lay it flat.

Begin to roll your fabric up. 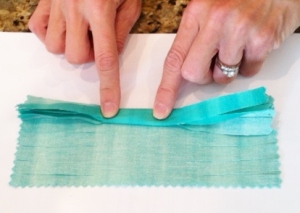 Continue until you have a tube with fringe at each end.

As you roll, untangle the fabric fringe, and try to keep your roll as tight as possible.

Pick it up, fold it in half, and pinch the top together so the fringe ends meet and the edge of the fabric is hidden between them.

Use a fabric scrap or string to tightly secure the top of your tassel. 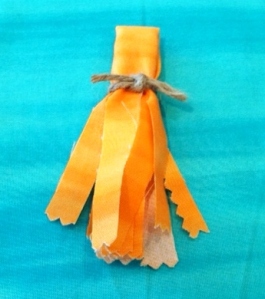 Make as many as you would like to have. Feed a string through each loop at the

top of the tassels and hang them somewhere you can enjoy them.

We followed the instructions from Prudent Baby

My son was ready for his big boy room and I was so excited to decorate it for him. Redecorating rooms in my home is a joyful hobby of mine. The only dilemma was I didn’t want to spend very much money. That’s when the idea of “freestyling” popped into my head. For those who aren’t avid HGTV viewers, Freestyled was a program where the designers took items already in the home and used them to redecorate a room. I decided to take on the challenge of “freestyling” my son’s bedroom and do it by spending no money.

My husband wasn’t a fan of the wall color. It was a shade of mint, perfect for a baby, but not a big boy. I mixed a few half empty cans of different shades of blue and whites and and came up with my own custom blend of Big Boy Blue. Trina kindly helped me repaint the room and I think it really changes the look of the room.  Much more masculine.

Lucky for me the big item, the bed, was given to me by my sister-in-law since her son had out grown it.  She even had a comfy mattress to hand down too.  Originally the bed frame had been one that my husband used when he was a boy which makes this piece extra special (awe). I painted the stained wood using left over black paint I had in my garage. For the bedding, I used the backside of a comforter that was once used by my daughter. It is almost brand new since she graduated to a queen bed when we moved to our new home. Based on the blue fabric, no one would even know this is girls bedding (I hope).  To finish off the bed area, I took two mismatched side tables from my guest room and placed them on either side of my son’s new bed.

I took a dresser that was mine when I was a little girl and painted it tomato red. Trina had this can of paint left over from painting a table and chairs for me (she likes to redecorate just as much as me). Trina also gave me the star knobs that were on a dresser she used when her son’s were babies.

I took a bookshelf from my daughter’s room that she wasn’t using. We have been fortunate to be given so many books from older cousins that filling this book shelf was quite easy and there are many more books to transition in over time. The baskets were from my daughter’s room. And the globe too. What a nice sister to share her things!

As for accessories, I kept many of the pictures and figurines that were already in my son’s room.  I also searched Pinterest for printables of things my son likes…super heroes, pirates, adventures, and Daddy’s favorite…baseball.  I put these in frames that I found around the house.  I made a gallery wall out of the framed prints. I can later change these out as my son’s interests change.

There you have it. My son’s big boy room, Freestyled.  (Almost…I did spend $16 on sheets since there were no twin size sheets to be found in my house and none at Trina’s house either).  Pretty good, huh?  Why not give “freestyling” a try in a room you’ve been wanting to redecorate? It has been a fun adventure to take on. 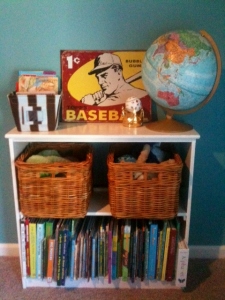 We want to wish you a very happy Thanksgiving! May you cherish your time with family and friends, be reminded of what you’re grateful for, and of course eat lots and lots of sweet treats! (And if you’re lucky you get to celebrate at fabulously decorated spaces like these!) 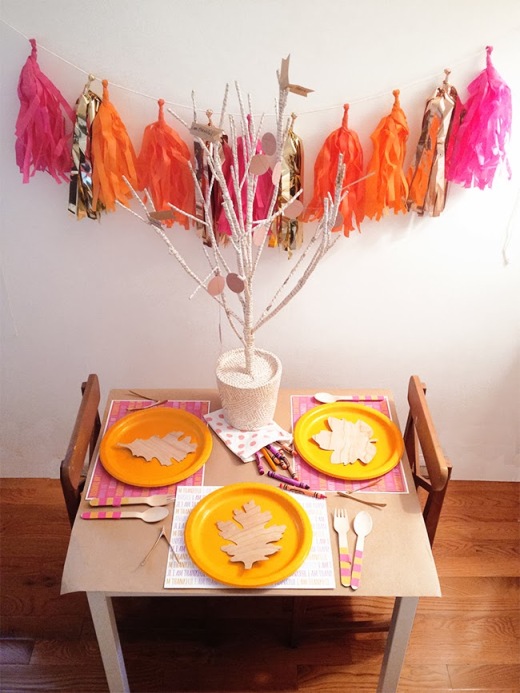 Wanna know what’s better than Snickerdoodle cookies? Snickerdoodles stuffed with Rolos!  Don’t underestimate this cookie’s ability to blow your mind. They are a game changer!

Hello! We are Trina and Tina, twins dedicated to fitness and health, except on Saturdays, our sweet treat cheat day. We started this blog to share delicious goodies and other creative inspirations. We hope to inspire you too!

A daily selection of the best content published on WordPress, collected for you by humans who love to read.

In the Kitchen with @BakersBunny

Passion on a Plate!

“So many books, so little time.” ― Frank Zappa

A Pinch of Sea Salt

Dairy-Free to Be You and Me

Brooklyn mama who loves to bake, plan and party!